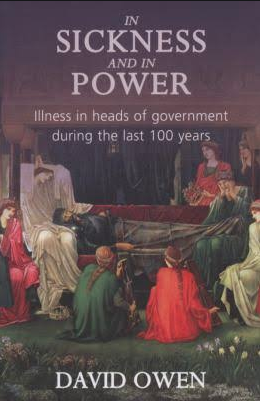 “A unique study of illness in heads of government between 1901 and 2007, and how it affects the process of government and decision-making, leading to acts of folly, in the sense of stupidity or rashness.

David Owen (Lord Owen) trained and practised as a medical doctor before being elected a Labour MP in his home city of Plymouth. He served as Foreign Secretary under James Callaghan from 1977 until 1979. He co-founded and went on to lead the Social Democratic Party (SDP), and is now a Crossbencher in the Lords.

‘In Sickness and in Power’ is a unique study of illness in heads of government between 1901 and 2007. It considers how illness and therapy – both physical and mental – affect the process of government and decision-making, leading to acts of folly, in the sense of stupidity or rashness. The author is particularly interested in leaders who were not ill in the conventional sense, and whose cognitive faculties functioned well, but who developed what he calls a `hubris syndrome’, which powerfully affected their performance and their actions. Such leaders suffer a loss of capacity and become excessively self-confident and contemptuous of advice that runs counter to what they believe, or even of any advice at all.

Long fascinated with the inter-relationship between politics and medicine, David Owen uses his deep knowledge of both to look at sickness in a wide variety of world political leaders. Within this, he devotes particular attention to four examples:
* Sir Anthony Eden at the time of Suez in 1956
* John F. Kennedy during the Bay of Pigs crisis in 1961 and his meeting with Nikita Khrushchev
* The last Shah of Iran and President François Mitterrand, and the extent to which they covered up their state of health
* The relationship between George W. Bush and Tony Blair, and their shared hubris syndrome, which also affected David Lloyd George and Margaret Thatcher.

The book ends by outlining some of the safeguards that society needs to address as a consequence of illness in heads of government.

‘In Sickness and in Power’ sheds new light on familiar faces and events. It is a fascinating read for anyone with an interest in history or medicine.

Publisher’s link: In Sickness and in Power